Luxottica is the largest sunglasses conglomerate in the world, selling nearly one billion (1,000,000,000) pairs of sunglasses annually.

But what you may not know, is that Luxottica does not only sell its own name brands, but rather, nearly 80 brands are actually controlled by the monopoly.

Not only are the brands licensed or controlled by Luxottica, but so are well known retail stores. For example, both Lenscrafters and Sunglass Hut are actually subsidiaries (100% owned) by Luxottica. Luxottica also controls Pearl Vision, Sears Optical, and Oliver Peoples.

In addition to its brands and retail chains, Luxottica owns a variety of websites, including FramesDirect.com, E-Lens.com, EyeBuyDirect.com, Coastal.com, Clearly.com, GLasses.com, and LensWay.com.

Although Luxottica controls the market, there have been some innovative market entrants in recent years, such as Blenders Eyewear, the surfing sunglasses brand acquired by Safilo, and Warby Parker who came out with the try-on-at-home model, as well as of course Peeq, which invented the world's first reversible two-pairs-in-one sunglasses.

For additional informationm, we recommend this Forbes article by Ana Swanson: https://www.forbes.com/sites/anaswanson/2014/09/10/meet-the-four-eyed-eight-tentacled-monopoly-that-is-making-your-glasses-so-expensive/ 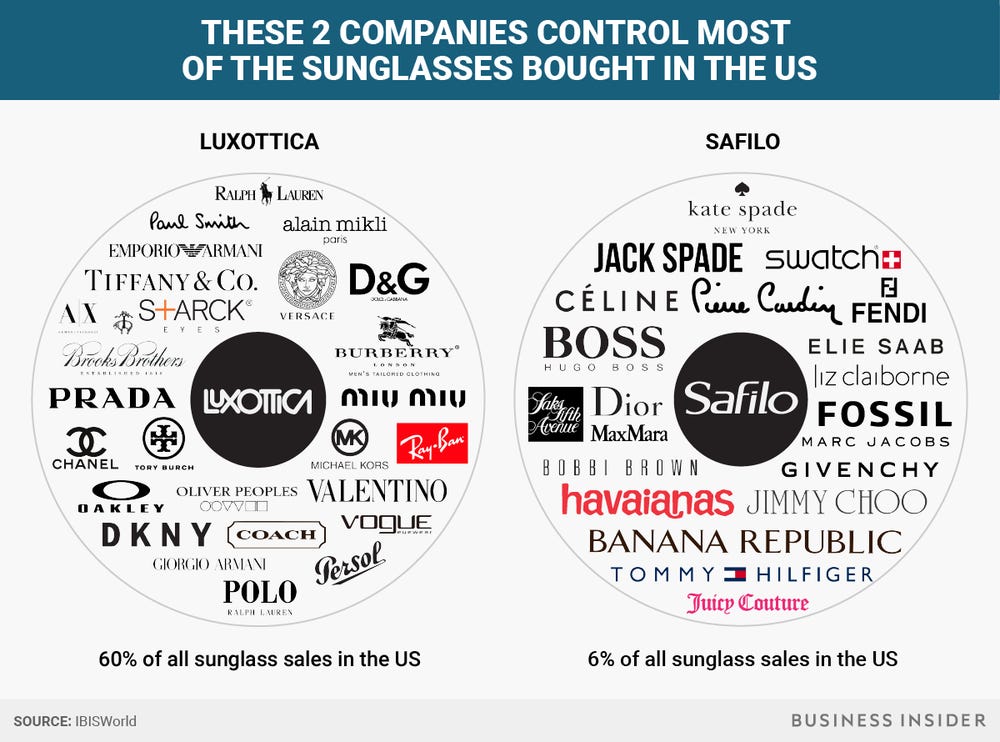 GLASSES & FULL ACCESSORY PACKAGE (Must Add to Cart)
Launch Sale: Add "Full Accessory Package" to any pair of Peeq glasses for FREE. If you're not ready for any reason, no problem, just enter your email and we'll send you a coupon code valid for a whole year!
*All we ask is that you provide feedback on your Peeqs